A female zebra shark in an Australian aquarium has astounded scientists by producing live offspring asexually, three years after being separated from her long-term mate. 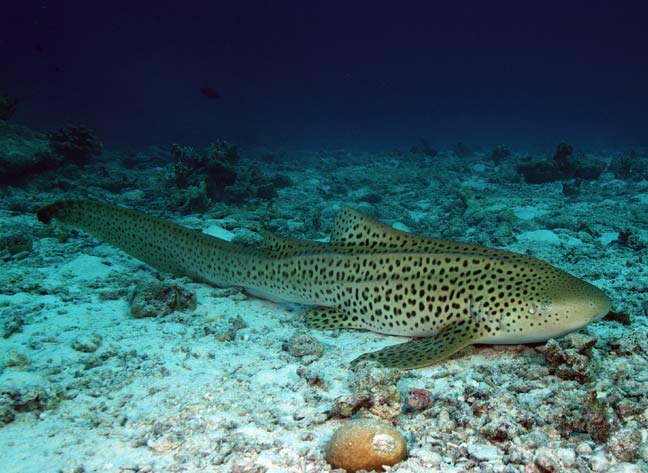 While scientists have previously observed "virgin births" in vertebrates such as sharks, rays and reptiles -- a reproductive strategy thought to aid survival during periods of isolation -- this is the first time a female shark has ever been observed reproducing asexually after previously mating with a male.

An eagle ray anda boa constrictor,both held in captivity, are the only other species known to have undergone this unusual biological shift.

The zebra shark, named Leonie, lived with a male partner at the ReefHG aquaraim in Townsville, Queensland between 2006 and 2012.

After having several litters of pups with her long-term male mate, Leonie was moved into a separate tank by the aquarium as part of an effort to scale back its breeding program.

One of Leonie's female pups, Lolly, was moved into the same tank as her mother. In 2014, two years after being separated from the male sharks, both Lolly and Leonie laid eggs.

hristine Dudgeon is a biologist with the University of Queensland who has been working in collaboration with the Reef HQ aquarium for several years. She published a report on Leonie's unusual display of sexual behavior in the Scientifici Report this week.

Dudgeon pointed out that sharks simply laying eggs without a male present is not unusual. "It's much like a chicken -- they lay eggs whether they are fertilized or not, if the conditions are good," she told CNN.

Staff at the aquarium noticed that some of Leonie's eggs contained embryos and attempted to incubate them out of curiosity, although none hatched.

The next year, Leonie and Lolly both laid eggs. This time, three of Leonie's eggs and two of Lolly's eggs emerged into live hatchlings.

There were two possible explanations for Leonie's eggs hatching," said Dudgeon. "One was sperm storage, which has been documented in several occasions. Sharks have been known to store sperm from male sharks for extended periods of time."

"The other was parthenogenesis [asexual reproduction]. This has been seen in a handful of sharks, but none that had mated previously."

Genetic analysis of Leonie's hatchlings displayed elevated homozygosity, meaning more genes are identical, and less diversity pointing to the likelihood that they had been produced asexually, rather than sexually through sperm storage.

"It was definitely a surprise," said Hamish Tristram, a senior aquarist with Reef HQ. "She had been mating successfully for several years, and there was nothing much published about such large animals switching reproductive strategy so quickly."

There are several theories surrounding Leonie's sudden unusual behavior. "One theory is that in the wild, if for some reason males can't have contact with the females for one breeding season, they can keep their lineage going for one or two seasons [through asexual reproduction], until they can reproduce the traditional way," said Tristam.

"[But] the genetic diversity of animals gets greatly reduced using this reproductive method," said Dudgeon. "Long term, they need to diversify to help them adapt to their environment."

Zebra sharks, also known as leopard sharks, were once a widespread species resident in tropical waters around the globe, but have recently been highlighted as an endangered species by the IUCN Red List of Threatened Species.

"These sharks are an apex predator, so they are like the proverbial canary down the mineshaft -- they are a poignant indicator of the quality of the environment in general," said Tristam, who is grateful that Leonie's case is attracting increased attention to the plight of the species. "The news that they are endangered was horrific news for biologists all over the world," he added. "It's a real concern."

Dudgeon and her team are now waiting for Leonie's offspring to reach sexual maturity before taking the next step in their research.

"We are keeping an eye on them, and ultimately we want to find out if her offspring can reproduce sexually," she said, as such an occurrence would be unusual.

"They mature around seven years of age. Unfortunately they'll be more prone to problems due to the reduction in the diversity of their genetic makeup, but if they survive to that point, I know myself and other researchers are interested in finding out more. Nobody has previously demonstrated successful sexual reproduction for offspring produced through facultative parthenogenesis."

So, offspring produced asexually have not yet been seen to create their own offspring sexually.

But the million dollar question for all concerned males: are the guys really obsolete? "Maybe in the short term the female (sharks) can do without males, but in the long term we need males again eventually," Dudgeon said. "We still need to keep them within arm's reach."

The world is your stage, and you can move about it as you wish